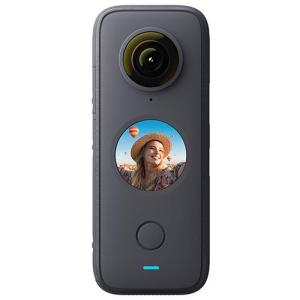 The Insta360 ONE X2 is a pocket-sized, waterproof, 360 camera with dual and single-lens modes. The camera uses both its front and rear lenses to capture 360 5.7K resolution video. The single lens mode turns this 360 camera into a standard camera that you can capture regular shots with. The FlowState Stabilisation smooths out your shot so it looks more steady.

Put all of your firepower behind one lens with Steady Cam mode. Ultra-stable, wide angle footage that’s ready to share in a snap. Unlock the creative freedom of 360. Capture everything and frame it later with super 5.7K resolution and H.265 encoding. FlowState Stabilisation is back with a better-than-ever algorithm. Throw out your gimbal and grab the pocket steady cam. Unlock an entirely new level of stabilisation. Tap Horizon Lock to instantly level the horizon in your Steady Cam or 360 videos. Shoot with the Invisible Selfie Stick (not included) and then watch it disappear in your edit. Capture easy drone-like angles and third-person perspectives with the flick of a wrist.

Go ultra slow-mo or speed things up with a hyperlapse. Edit your 360 or Steady Cam footage with ease on your phone app. Slow yourself at the centre of the action. Bullet Time is easier and better than ever with automatic horizon leveling, smart speed-ramping and an all-new accessory. Freeze your video at the height of the action with just a tap in the app's speed settings. Tap or say the word to point at your target. Deep Track's improved subject recognition enables you to track people, animals and other moving objects, while the algorithm keeps them centre-frame.

The easiest way to edit. Pick your footage and let Shot Lab do the rest. Shot Lab keeps getting better with a range of smart templates that keep your edits fresh. Insta360 ONE X2 is IPX8 waterproof to 10 metres (33ft). Take it out in a rainstorm or poolside without a worry, or grab the Dive Case for seamless underwater stitching down to 45 metres. Capture colourful underwater content without using an external filter. Just tap AquaVision in the app or Studio and the AI auto-balances out colours. PureShot enhances the dynamic range of your low-light photos, while reducing noise and preserving detail. Achieve in a tap what used to take multiple bracketed shots.

AmazBack is a completely free site that offers discounts through coupons and offers from leading national and international online stores. Every time you make a purchase over the internet, we help you save money. We deal with the best e-commerce companies and search the internet to find and offer exclusive coupons and special discounts at your favorite online stores.